Home » Senza Categoria » You are reading » 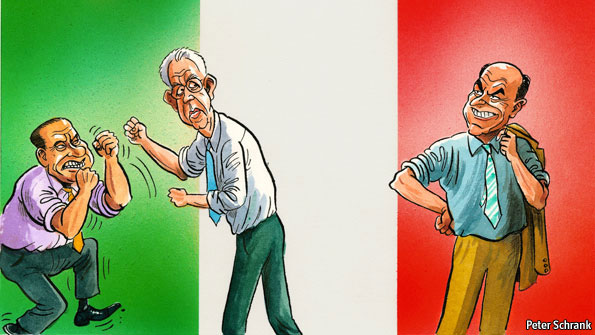 Paradoxically, it is the reassuring Mr Monti who is most likely to cause an unstable result in the form of a hung Senate. (Italy’s electoral law guarantees a majority to the biggest party in the Chamber of Deputies.) That, however, would enable Mr Monti to offer his services to Mr Bersani as a coalition partner and, just as importantly, a counter weight to the radical left.

Keeping the radical left in check

AFTER weeks in which both the media and markets were mesmerised by Silvio Berlusconi’s vacillation, Italy’s attention switched over the holiday season to Mario Monti, his successor as prime minister. In a Dance of the Seven Veils, Mr Monti, who has headed a non-party government since November 2011, teasingly revealed his intentions. First, he announced he was ready to serve again as prime minister after the general election, which is likely to be held on February 28th. Then he launched a policy agenda. Finally he held talks with a cluster of like-minded centre-right groups.

It was decided that they should form an alliance for the election to the Senate, but run independently—with as many as four sets of candidates—for the Chamber of Deputies. Adding to the potential for confusion in the minds of voters, Mr Monti ruled himself out of the election, but not the campaign. His name will feature on the logo of the parties that support his agenda, but he himself will not be a parliamentary candidate (ostensibly because, as a life senator, he is already a member).

It was not the most propitious start, especially since two of his best-known supporters decided to pull out of the race. Corrado Passera, the “super-minister” for economic development, would only run as part of a fully integrated slate. Luca Cordero di Montezemolo, who heads NTV, a high-speed train operator, and Ferrari, a sports-car maker, feared charges of conflicts of interest. Polls taken before Mr Monti showed his hand nevertheless suggested the prime minister’s endorsement could be worth about ten percentage points to the combined vote of the parties backing him.

That, though, would still give them only about 20% of the vote. The party leading the polls is the centre-left Democratic Party (PD), which has attracted scant attention since a primary election in December that saw its leader, Pier Luigi Bersani, chosen as its prime ministerial contender. On December 29th and 30th, the PD held another primary to select parliamentary candidates. The PD put the turnout at over 1m, a respectable tally for a vote limited to party members held just after Christmas.

In recent polls, the PD has been scoring, on average, more than 33%. Its allies—notably the more radical Left Ecology Freedom (SEL)—have been getting another 6%. That would be enough to give the left a working majority in both houses of parliament.

A clear-cut victory, even for the centre-left, should be welcome to the markets. Romano Prodi, who headed a centre-left government in 1996, implemented an austerity programme that was largely responsible for winning Italy admission to the euro. His second government from 2006 to 2008 undertook the only concerted attempt to liberalise Italy’s hidebound economy until Mr Monti’s arrival. The minister in charge of deregulation was Mr Bersani.

In practice, however, a PD-SEL coalition with a secure majority would prompt misgivings. The PD was born of a merger between the heirs to western Europe’s biggest (and most moderate) Communist party and a smaller group with roots in the progressive wing of the Christian Democrat movement. Mr Prodi, a Catholic academic, ran Italy’s last centre-left government from its right-most edge. Mr Bersani, a former Communist and lifelong politician, is further to the left. And it looks as if his party in parliament will also be tilted more in that direction. To secure the prime ministerial candidacy, Mr Bersani had to fight off a challenge from the moderate wing of the PD in the person of Matteo Renzi, the young mayor of Florence. Mr Renzi’s followers did poorly in December’s legislative primaries.

But the results also furthered a much-needed rejuvenation of the PD that should help to erode its internal divisions. A 31-year-old will top the list of its candidates in Lombardy, the region around Milan. Her counterpart in Palermo, also a woman, is aged 27. Like others who will sit on the PD’s benches in the next parliament, both are too young to have been either Communists or Christian Democrats. As for Mr Bersani, his indisputable left-wing credentials could mean he is better able than Mr Prodi to keep in check the radical left whose constant sniping helped bring down Italy’s last centre-left government.

For the time being, however, Mr Bersani’s biggest challenge will be to maintain the PD’s lead. Mr Berlusconi is in growing difficulties. His best hope of exerting influence after the election is in the Senate. For that he needs an alliance with the Northern League, which can deliver him seats in Lombardy and Veneto. The League’s de facto leader, Roberto Maroni, is insisting that he would agree to an electoral pact only if Mr Berlusconi stepped down as his party’s candidate for prime minister.

Mr Monti poses an altogether more serious challenge to Mr Bersani. What scant polling evidence there is suggests he can rob votes from the PD. And, as a political outsider, he is well placed to appeal to the voters who are most likely to decide the outcome of the next election—the 40% who say they have either not made up their minds, or lean towards abstention.

Paradoxically, it is the reassuring Mr Monti who is most likely to cause an unstable result in the form of a hung Senate. (Italy’s electoral law guarantees a majority to the biggest party in the Chamber of Deputies.) That, however, would enable Mr Monti to offer his services to Mr Bersani as a coalition partner and, just as importantly, a counter weight to the radical left.